All packed up and supplies on board and we met our skipper Annie for the first time and she is great! Which is just as well as we are all going to be in very close quarters for the next eight days. Annie from Airlie beach and very experienced and familiar with the waters and reefs ahead. The sailing conditions are perfect as we set sail out of harbour. 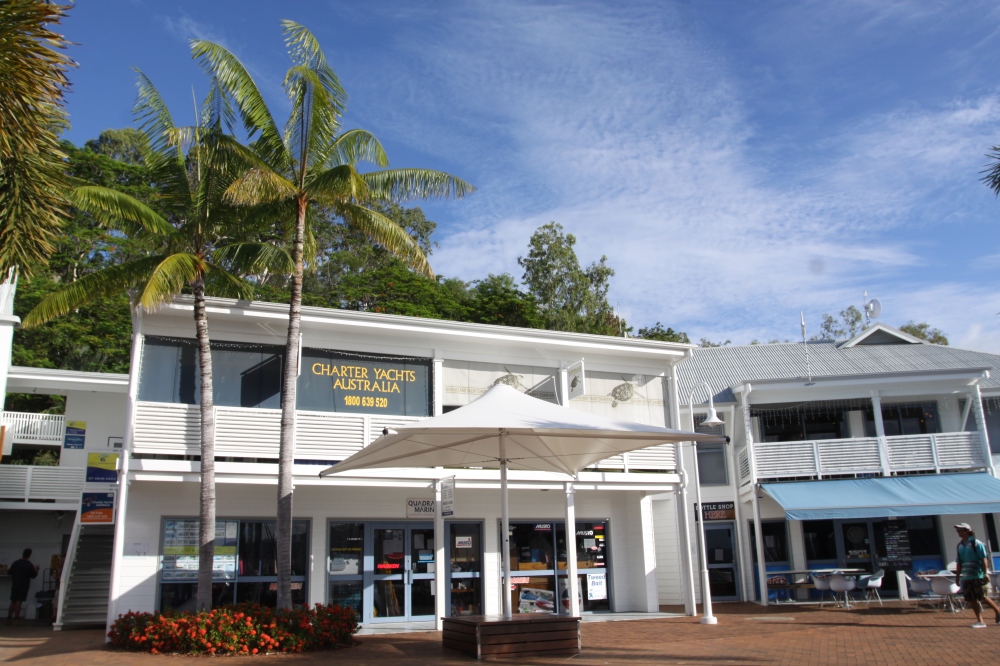 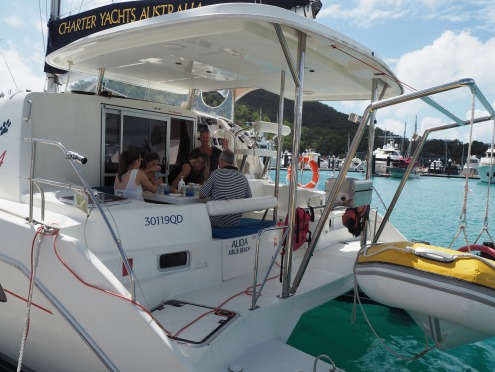 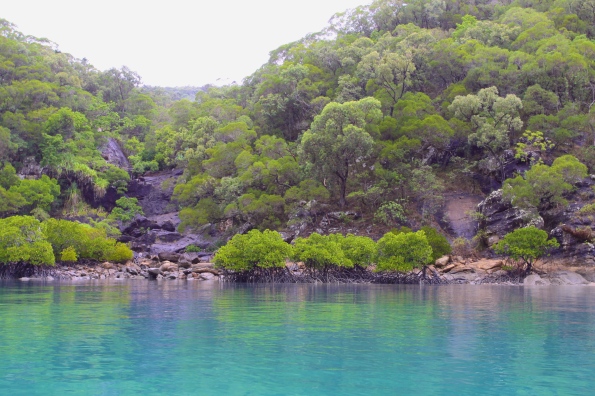 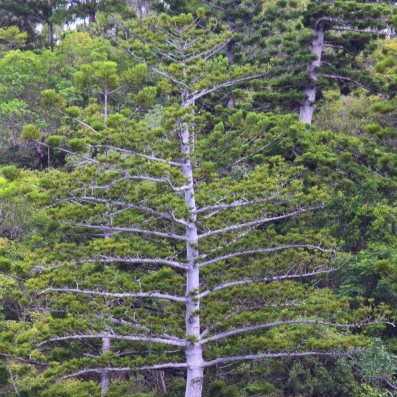 Sailing around Hook Island we stop off at Cave Beach and ashore there is a beautiful walk up through the leafy, rocky landscape up to an aboriginal cave decorated with ancient wall paintings. Sadly as we began our walk the heavens opened to a torrential rain storm so once back on the water we decided to get straight back in for an outstanding snorkel over the reefs nearby. Waters full of exotic fish and on the surface of the waves we became very adept at spotting the  turtles popping up for air before they dived back below the surface. We had a quick stop on Hamilton Island and Annie even managed to get us a booking at the small zoo there to stroke the rather temperamental Jedda, a young Koala bear who seemed to only co operate with Immie. First night we anchored in Cid Harbour in the Hunt Chanel away from any other noisy boats we dined outside using the on deck BBQ. 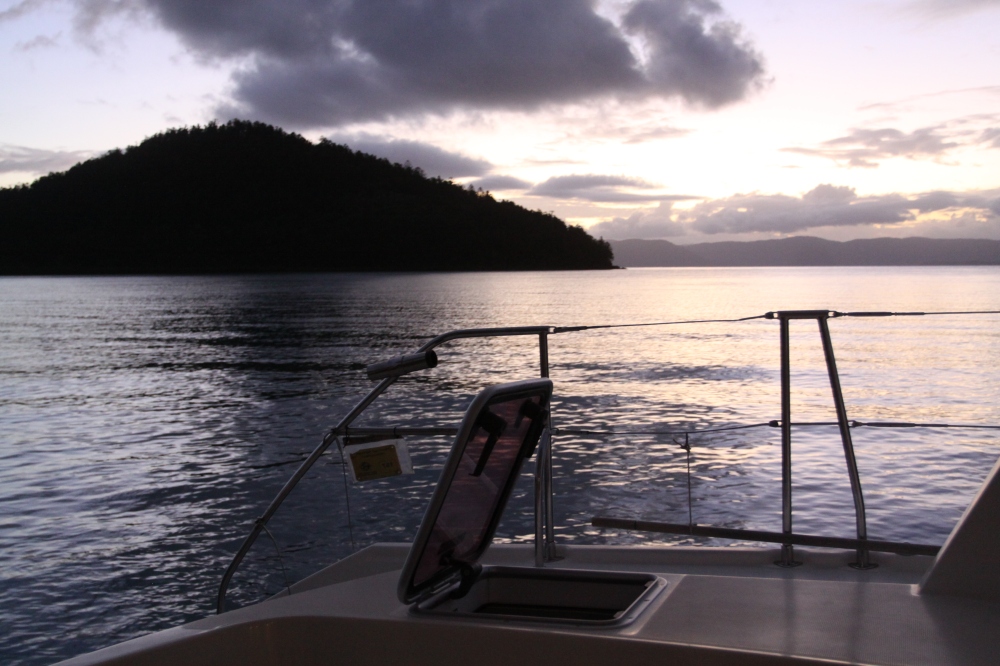 Christmas Eve and we sailed over to visit a friend of Annie who is a regular resident on the water. Buddy lives on his adapted houseboat and we found him gutting a haul of fish that he had made that morning. We brought supplies include some fizz and a steak for Buddy as apparently that is his favourite! We were highly entertained by Buddy playing his harmonica, some singing and also his ability to play the forks! Some quite extreme political views were also aired by Buddy. After our drinks party we had a very bumpy ride around to Stonehaven where we were relieved to set down our anchor.

Champagne Breakfast on deck in the beautiful sunshine. Christmas Day and we sailed over to Black Island and the girls had a very lengthy snorkel at over the most stunning Langford Reef. We had a traditional Australian Christmas lunch of Gigantic prawns on the BBQ and salmon. The afternoon was spent on Langford Beach which is the most beautiful sandy strip of beach which during low tide is extensively long and you can walk from one end to the next but at high tide the island becomes two much smaller and separated islands. At low tide this is a long expanse of white sand in the middle of the ocean. Great fun to have a long walk along these sands at low tide. Now situated directly opposite the Heymann Island which is highly exclusive to the extent that no boats are allowed within the harbour without permission. The ‘One & Only ” resort. Annie managed to obtain the phone number of the head chef and harbour master and having spoken to both Immie set off for a quite impromtu interview to join the team of chefs at this 5 star resort! Immie was met on the Quay by the head chef Justin who she spoke to and was given a tour of the resort. 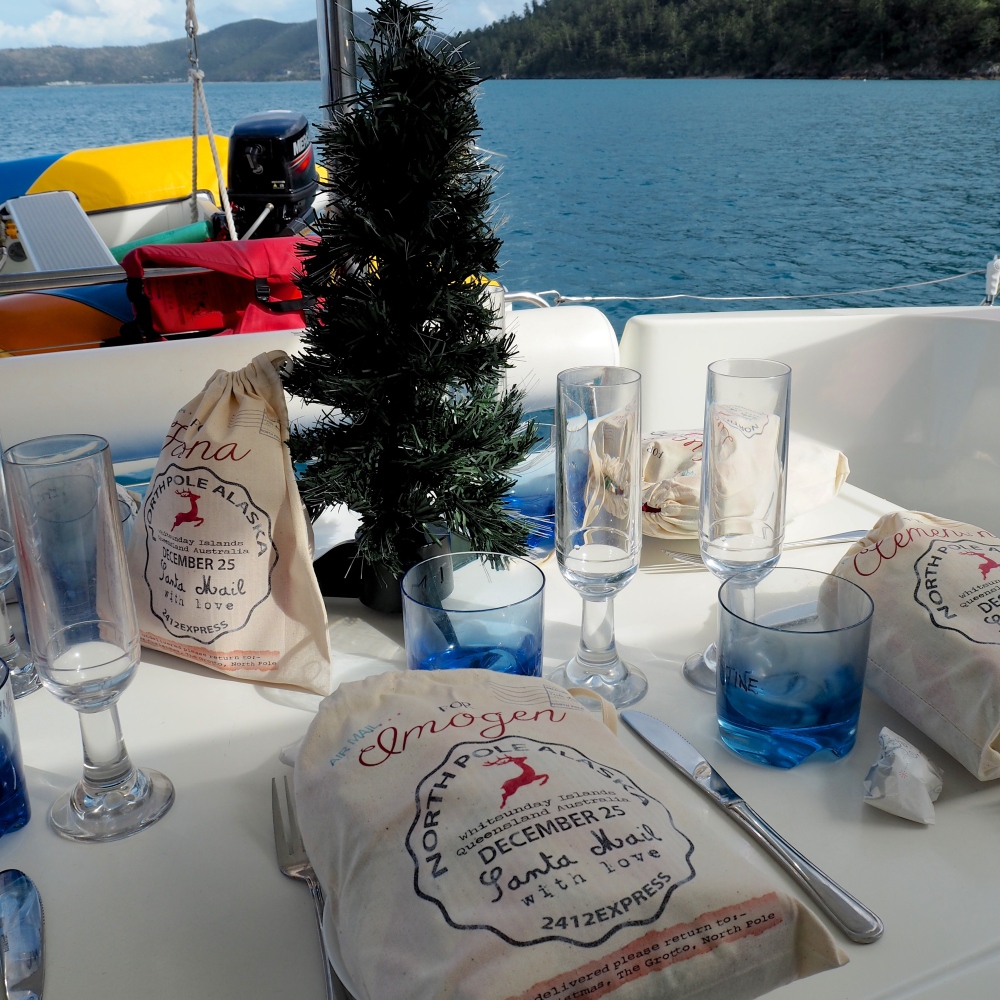 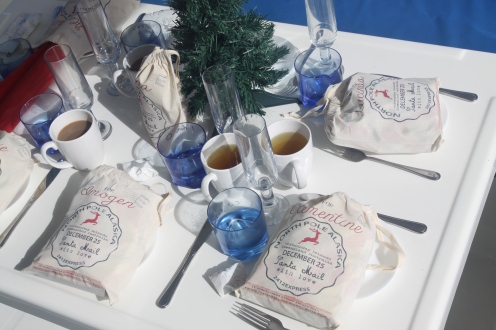 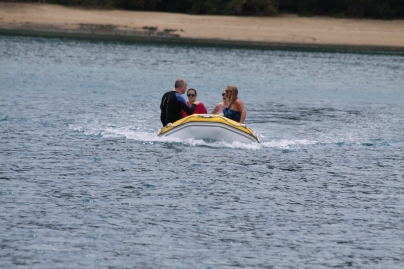 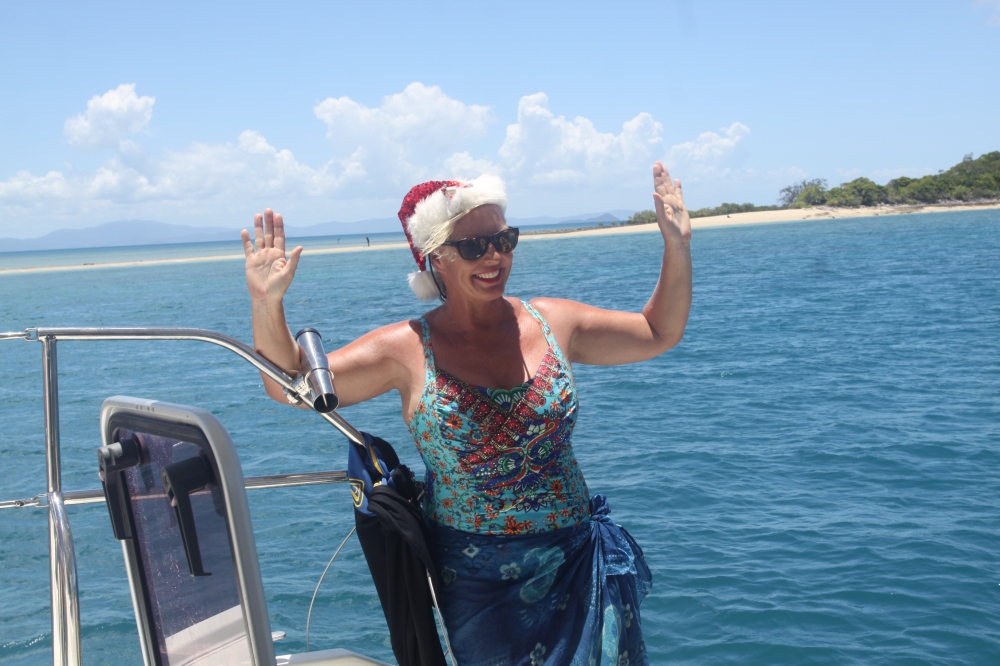 Sailing on the next  night was spent at Hook Passage and the waters were full of life. As we sat on deck we cold hear all sorts of splashing and strange noises so could not resist and once we looked overboard we saw two dolphins playing in the water by the boat as well as a small shark and lots of squid. The waters around these islands are all part of a national park so there are very strict indications of where you may and may not fish. In the dark night time waters there were an abundance of squid and in some areas (where permitted) we did try and catch a few but with no success!

Boxing Day and a very Bumpy ride poor Lucy was feeling quite seasick. Spectacular day ahead as we set ashore to walk up and over towards the famous Whitehaven Beach. The first glimpse of this is from a high viewpoint with the most stunning view over this truly incredible sight. You are then guided down another pathway to walk down onto the beach itself which is a massive expanse of silicone crisp white sand which does not absorb the heat so remains cool underfoot despite the unforgiving beating sunshine. The beach is surrounded by large rock boulders and Australasian bush. We spent some time exploring and enjoying it all before heading back to board Alida. Once back on board we sailed accross to the Hill Inlet and Tongue Bay to arrive at the Southern end of Whitehaven Beach. As the sun began to set we watched from the boat as the hoards of crowds boarded ferries, an assortment of boats and sea planes. Once the beach was totally deserted we went ashore for a walk on this totally deserted and idylllic beach as the sun went down. 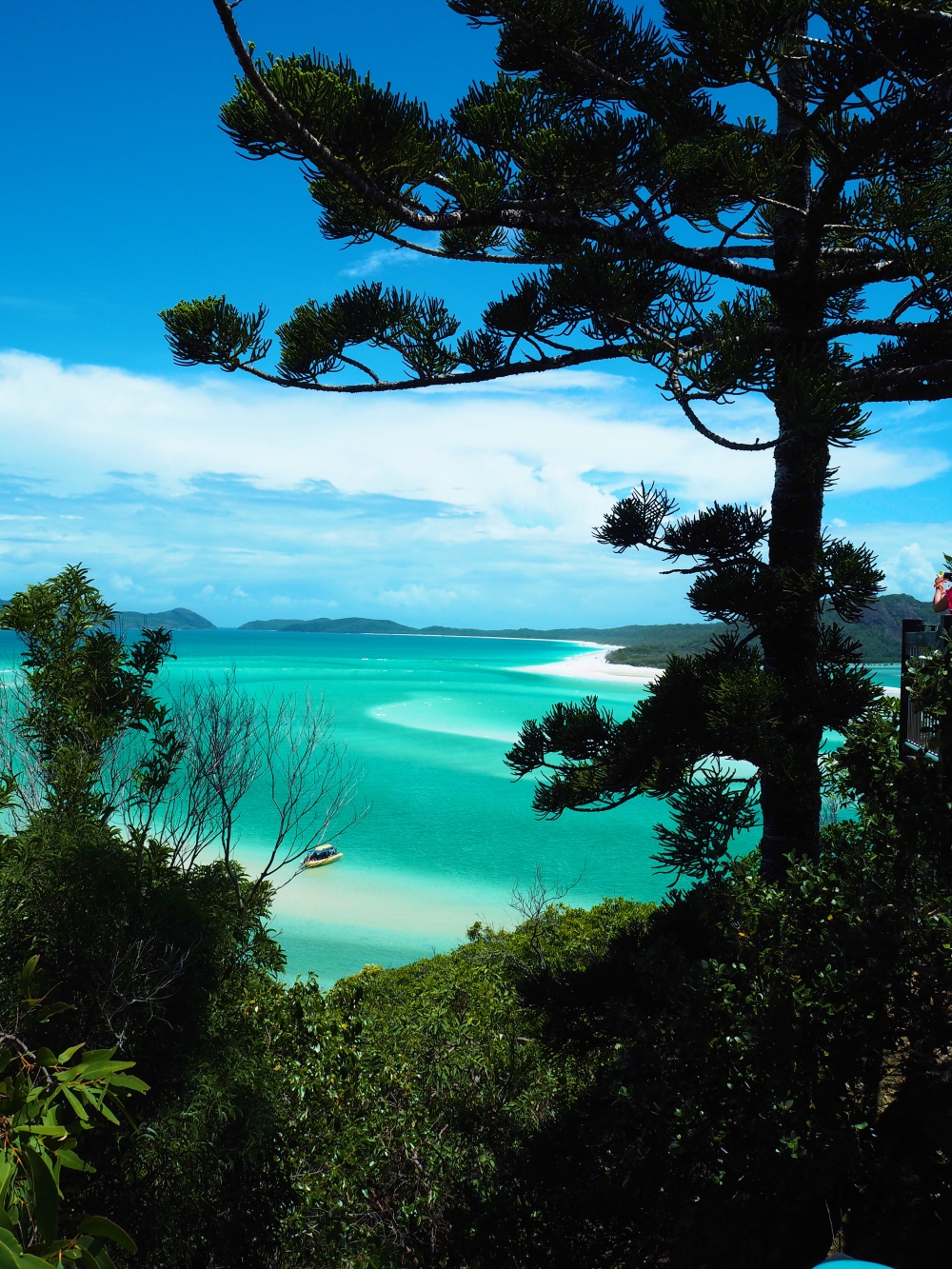 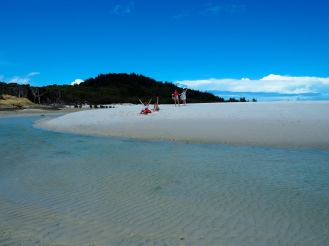 Early morning rise to ensure that we could all enjoy some time on our own private Whitehaven Beach and a dip in the ocean. While we enjoyed ourselves Annie conjured up a fantastic breakfast and we returned on board to a fabulous full breakfast on board. Amusing watching as the beach slowly filled up again with vessels dropping off and we had a leisurely start to the day. Accross the Solway passage with big waves of 2 metres high so a bit of a turbulent ride! Relieved to be spending the night in Harbour we pulled in and tied up for the night. Hamilton Island is a great place to spend the afternoon with good shops and restaurants. Annie had booked us in for dinner at the Beach Club for our last night altogether as Immie is flying out of Hamilton back to Sydney tomorrow morning. 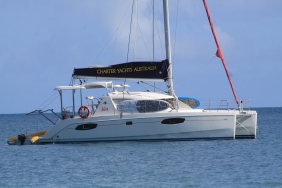 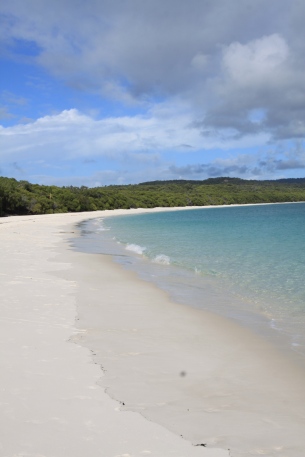 Immie safely dispatched to catch her flight we set off back towards Airlie Beach to return the boat. Sailing conditions were perfect and once back we had a celebratory thank you drink with Annie for a truly wonderful week exploring the Whitsunday Islands. So much of our experience was due to her knowledge of where to go when as for the duration of our time here we managed to avoid all the crowds and always visit islands and beaches in total privacy as well as having ideal anchorage sites each night again always peaceful and private. A memorable week for us all. 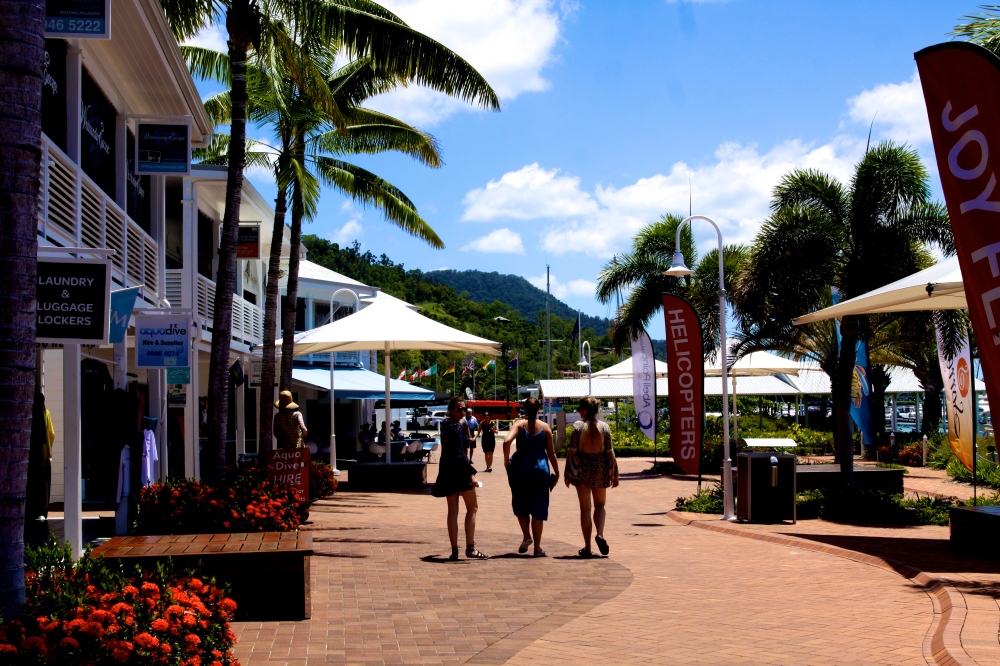 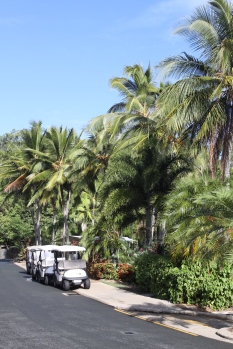